Home About Us Board Members Joseph Martial Capo Chichi

Joseph Martial CAPO-CHICHI, a physiotherapist since 2004, with vast experience and interest. Holder of a BSc in physiotherapy, he also obtained his BSc in Organizational Psychology and MSc in Health-Environment and Sustainable Development. He has been a private practitioner for 4 years, and currently works for the government where he is responsible for the prevention and management of disabilities at the Buruli Ulcer and other skin ulcers at Allada in BENIN. With his experience in working with patients, he is also the focal point for rehabilitation in the national program for the control of leprosy and Buruli ulcer in BENIN. Since 2005, he supervises trainees from different countries each year.

After graduation, he joined the Beninese Association of Physiotherapists (ABEKIR), and quickly became a member of the Board. Since then, he has held various positions in the board and has been President of the Association (2014-2017).

He was the main focal point of the integration of ABEKIR into the WCPT in 2015 and recently convinced of the benefits of being a member of WCPT, he has since worked with associations of physiotherapists in African French-speaking countries that are not yet members. As a consultant to WCPT in the framework of the SUDA project, he is currently the mentor of the Association of Physiotherapists of Mali. He is advocating & Lobbying for WCPT-Africa to be present in the everyday life of physiotherapists for better collaboration whatever the language of work.

As Vice Chair, Mr. Capo-Chichi works with other WCPT Africa Region Board members to give leadership and execute WCPT policies in the African Region.

Private practice Physiotherapist, and also works with the Government of Benin Republic on various national rehabilitation programs, where he is responsible for the prevention and management of disabilities at Allada, Benin.

Join us in the Republic of Benin, October 27-29, 2022, for the 11th World Physiotherapy Africa Region Congress. 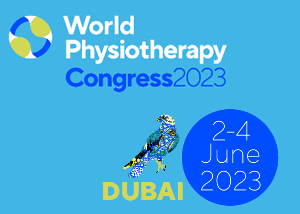